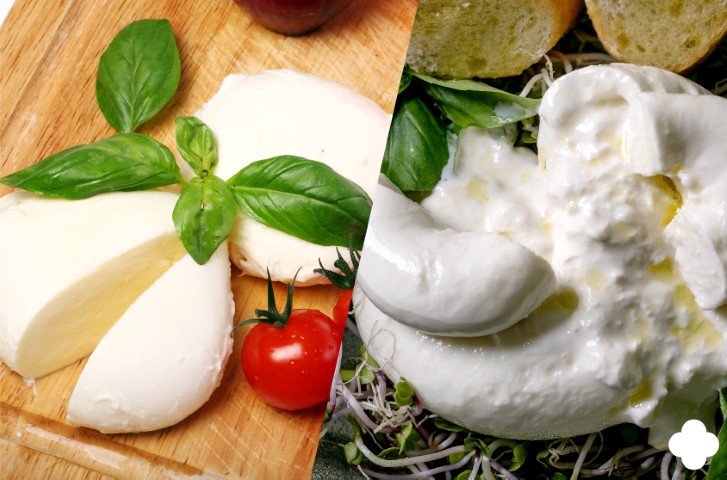 Posted at 10:30h in Products by Flor de Burgos

Mozzarella and burrata are two of the best Italian cheeses and are also confused on many occasions. So in this article we want to talk about the differences between the two types of cheese.

Similarities between mozzarella and burrata

There are so many confusions between these two types of cheeses because the process of elaboration is very similar. Both the mozzarella and the burrata are made from buffalo or cow’s milk and are fresh cheeses.

In addition, the technique of elaboration is the same in both cases. This technique involves immersing the curd obtained from the milk in water at 90 degrees. In this way a mass of great elasticity is obtained that is worked with the hands.

Now that we have told you the similarities between the two cheeses, we come to tell you about the differences.

Differences between the burrata and the mozzarella

On the other hand, the burrata has a more creamy texture because it is filled with cream of milk. This cream of milk is known in Italy as “Stracciatella”.

Another aspect that should be noted is that the burrata always comes in the form of small sacks while the mozzarella comes in different formats, from balls of different sizes to rectangular blocks.

How to consume them?

Finally, we want to recommend the best ways to consume each of these cheeses. While the burrata is best eaten alone with a little olive oil the mozzarella is ideal for various dishes such as salads, pasta dishes or pizzas.